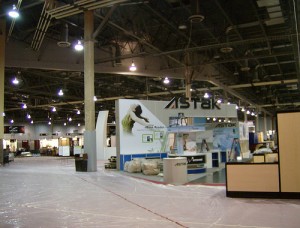 With thousands of Press already here and the blog and Press lounges more crowded than last year, CES is not nearly in full swing.   Tonight Steve Ballmer will give the Pre CES Keynote, a role that has passed to him from Bill Gates after last year’s very clever Gates farewell to CES which included the clever Gates video with his friends in politics and entertainment as well as a Guitar Hero performance.

CES is Las Vegas’ largest event and takes place pretty much all over town although the key venues are the Las Vegas Convention Center and next door Hilton Hotel and the Sands Convention Center and attached Venetian Hotel.     About 2700 Exhibitors are showcasing here to some 4000 press and 130,000 attendees.    There are also hundreds of sessions and many keynotes.    For details go to the CES Website:   CES 2009