Update:  Here is the Kindle info from Amazon – Amazon Press Release on Kindle 2

Engadget is reporting that the the Amazon Kindle 2 will be announced on Monday with a release date of about February 24th. (Picture from Engadget website but I think it’s an Amazon press photo).

The new Kindle looks a lot better than the first edition, but at a reported price of $359 I’ll be surprised if this takes off to the extent many have predicted. However I certainly would say that based on the very weak Kindle imitations we saw at CES last month Amazon certainly appears poised to have the best in class book reader.

Amazon remains conspicuously silent on sales information for the Kindle leading to what I’m still inclined to think are extraordinary claims by some analysts, but if they really can corner the book reading market maybe the Kindle 2 really will become the new “must have” gadget. 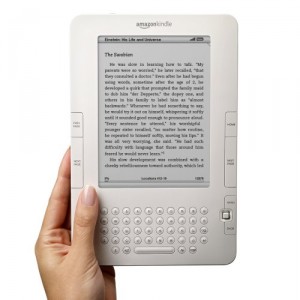