Update: Well, the reviews seem a bit mixed from the tech crowd even as the TV news stories are about the best thing Apple could have hoped for – breathless anchors telling us how much they want an iPad.

Wall Street Journal has a good summary of the early buzz. My take so far is that these are the key features in play:

This morning Apple launched what is almost certain to become the new tablet computing standard, the Apple iPad. Reviews will be coming in at a lightning pace today and we’ll try to summarize them later, but in the meantime here’s a great “Everything you need to know about the iPad” piece from the Gizmodo people. 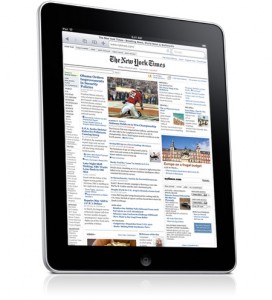