Tim Snyder is a journalist that frequently writes about sustainable building topics and green living.
Tim is an in-house writer for Dr. Energy Saver, a network of home energy audit contractors.

Advancing the science of saving energy with apps & hi-tech equipment

More than one journalist has compared the house to the human body when attempting to explain       the many factors that influence home energy performance. The string of metaphors in
this  discussion includes a circulatory system (ductwork), an HVAC “heart” that pumps    conditioned air t throughout the house, and a multi-layered skin (the “building envelope”) that provides protection from the elements as well as insulation.

In this “house-as-human” analogy, a home energy audit is the equivalent of a comprehensive health checkup, involving an extensive inspection to diagnose various energy-wasting conditions and prescribe appropriate treatments. A homeowner who follows this customized prescription for energy savings can expect several important benefits: reduced use of electricity and other energy sources like natural gas or fuel oil, improved “green” value because of lower carbon emissions, lower utility bills and improved indoor air quality.

Not surprisingly, the science of saving energy (technically referred to as “building science”) has fostered a small revolution in hi-tech equipment and software. Where yesterday’s energy auditors were taught to sketch house elevations and floor plans on a paper pad and figure heating and cooling loads with a calculator, today’s auditors are entering values on a tablet touch screen to produce faster, more accurate energy audits that include specific recommendations and projected energy savings. Even the most basic DIY energy assessment programs include factors such as lighting (# of CFLs or LEDs compared to incandescent lights), appliances, water heater efficiency, insulation levels, window specifications and climate zone.

While some companies  (like kWhOURS  www.kwhours.com and Optimiser   www.optimiserenergy.com ) focus on providing energy auditing software for laptops and tablets, others offer hi-tech equipment. Using a specially designed infrared camera, you can produce thermographic images showing temperature variations that indicate air leaks and/or missing insulation. During a blower door test (a standard diagnostic procedure during an energy audit), a powerful, computer-controlled fan is installed in an exterior doorway to depressurize the house. With the house set to “winter” mode while the fan operates (windows and exterior doors shut), it’s possible to measure air leakage and even pinpoint leak locations using special smoke-generating tools.

The technology being used in energy audits is quite remarkable.  Just as medical specialists can assess internal organs with tiny cameras that enter the body through small incisions, an energy analyst can peer into wall cavities using a borescope. Utilizing fiber-optic technology, this diagnostic tool can pass still or video imagery through a flexible tube that the technician inserts into a building cavity through a small hole. 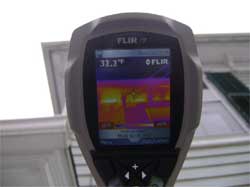 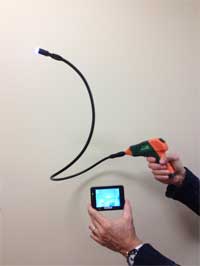 Most people can agree with the idea that conserving energy is the right thing to do for our natural resources and the environment. Nobody, however, disputes that saving money on your monthly power bill is better than unnecessarily throwing your cash away. Despite that realization, few people are willing to sacrifice their own personal comfort for a few dollars’ savings. Fortunately, they no longer have to.

When nobody is home, there’s no reason to heat or cool a house to the same temperature that we’d want when we’re there. At the same time, nobody wants to return home after a long day to a house that’s sweltering hot or freezing cold. Even those homeowners with digital, programmable thermostats often fail to properly set them — it’s just another confusing device to learn how to use.

Fortunately, technology has finally caught up with the everyman. Wi-Fi enabled thermostats are quickly becoming the norm, enabling homeowners to adjust the temperature of their house from anywhere in the world where they can access the internet on their phone or mobile device.

Although you could wait until your existing thermostat fails, making the switch to a Wi-Fi model now can pay for itself in a matter of months. Here are three reasons to make the switch sooner than later:

Although adjusting your home’s temperature from across town, in between text messages, may still sound far-fetched to some, it’s already commonplace for early adopters of the new technology. Best of all, Wi-Fi enabled thermostats can now be purchased for as low as $100 from traditional manufacturers like Honeywell and Lennox. Niche manufacturers like Nest even include models that monitor outdoor temperatures and adjust themselves, in turn.

Considering that 43 percent of the average home power bill is consumed by heating and cooling, there’s likely a good chunk of your bill that’s being used unnecessarily. By controlling your home’s temperature every minute, from anywhere, you can whittle down your monthly usage and pay for the new thermostat, possibly within a couple of bill cycles.

2. There’s no reason to pay for what you’re not using

Would you leave your lawnmower running for an hour while you went inside for lunch? Even though we’re away from a home for a large portion of the day, we often continue to heat or cool the house just so that the temperature is comfortable when we walk in the door. With remote access, we can have the best of both worlds. Fifteen minutes before arriving home, adjust your thermostat to the temperature you prefer, and your HVAC system will crank into motion. Unlike traditional programmable thermostats, there’s no need to attempt to predict our daily schedule — we can adjust on the fly.

3. You can budget ahead of time

Nobody likes surprises that cost them money. With most things we purchase, we know exactly what we’re paying, but with utility bills, we tend to cross our fingers and hope for the best. Developments like Wi-Fi thermostats make that guessing game a thing of the past. We now have the capability to monitor and control our energy consumption down to the minute.

Products and smartphone apps like Wattvision and eMonitor are at the helm of a new era of better home energy management. When we can track exactly what areas or appliances in our home are costing us the most money, we respond by replacing antiquated equipment with newer models designed to consume less. That puts pressure on the manufacturing industry to respond, in turn.

Whereas wasting electricity in our homes was once the norm — it could hardly be helped — the technology to control and monitor our home energy use is quickly becoming mainstream. Wi-Fi thermostats are a cost-efficient way to dramatically lower your monthly utility bill, effective immediately!

Jay Harris is a Home Depot “on the floor” sales associate and a regular contributor to Home Depot’s blog. His interests include providing tips on tv stands and mounts, as well as LED light bulbs.