The Consumer Electronics Show in Las Vegas is more than just a showcase of the world’s latest and greatest technologies, it is where industry movers and shakers often announce new innovations and set the tone for how technology will move forward in the coming year. For many years Bill Gates of Microsoft led the keynote lineup, but with Gates’ retirement to pursue the objectives of the mega-philanthropic Bill and Melinda Gates foundation it is now Steve Ballmer who effectively “opens” CES with his keynote talk the night before the official conference begins.

We’ll also be live blogging the CES Press Event on Tuesday where several highlighted innovations from the conference make their debut.

Steve Ballmer joined Microsoft in 1980 after being the first business manager hired by Bill Gates and was named chief executive officer in 2000. With Microsoft’s goal of delivering an integrated platform to enable a seamless experience for consumers across PCs, devices and services, Ballmer is focused on continuing Microsoft’s leadership across the company’s seven businesses.

Gary Shapiro will deliver his annual state of the industry address immediately before the 2010 CES opening keynote from Ford President and CEO Fred Mulally. Shapiro is president and CEO of the Consumer Electronics Association (CEA), the U.S. trade association representing some 2,000 consumer electronics companies and owning and producing the world’s largest tradeshow for consumer technology, the International CES. Shapiro is an active leader in the development, launch and marketing of HDTV. He has testified before Congress on HDTV and other technology and business issues more than 20 times. He co-founded and chaired the HDTV Model Station and has served as a leader of the Advanced Television Test Center (ATTC). He is a charter inductee to the Academy of Digital Television Pioneers, and in 2003 received its highest award as the industry leader most influential in advancing HDTV.

President and CEO of Ford Motor Company, Alan Mulally, will deliver the opening keynote address at the 2010 International CES. “Alan Mulally has positioned Ford as a leading innovator in the automotive industry, and we are pleased to welcome him back to CES,” said Gary Shapiro, president and CEO, CEA. “For the auto industry and all other businesses that use technology, CES is the single must-attend event where business gets done.” Mulally will deliver his keynote address, following a State of the CE Industry keynote address delivered by Gary Shapiro, president and CEO, CEA. Mulally joined Ford in 2006, after serving as executive vice president of The Boeing Company and president and chief executive officer of Boeing Commercial Airplanes. Mulally is known for his innovation and focused leadership, while working to transform Ford into a lean, global enterprise. He has served as a past president of the American Institute of Aeronautics and Astronautics (AIAA) and is a former president of its Foundation. Additionally, Mulally served as a past chairman of the Board of Governors of the Aerospace Industries Association. He was named to Time Magazine’s 100 Most Influential People in 2009, “Person of the Year” in 2006 by Aviation Week magazine and one of “The Best Leaders of 2005″ by BusinessWeek magazine.

Carol Bartz has served as chief executive officer and as a member of the Board of Directors of Yahoo! since January 2009. Previously, Bartz served as executive chairman, president and CEO of Autodesk, Inc. During her 14 years at Autodesk, the company diversified its product line and grew revenues from $285 million to $1.523 billion in FY06.

She previously held positions at Sun Microsystems, most recently as vice president of worldwide field operations and an executive officer of the company. Before joining Sun, she held product line and sales management positions at Digital Equipment Corporation and 3M Corporation. She is currently a member of the Board of Directors of the National Medals of Science and Technology Foundation. Ms. Bartz also serves as a director of Cisco Systems, Inc.

Paul Otellini became Intel’s fifth CEO in 2005, succeeding Craig R. Barrett. Otellini previously had served as Intel’s president and chief operating officer, positions he held since 2002, the same year he was elected to Intel’s board of directors. Otellini is now focused on continuing Intel growth by extending Intel Architecture into adjacent market segments of embedded, handhelds and consumer electronics and to continue building new businesses by tackling big problems.

Nokia CEO Olli-Pekka Kallasvuo is preparing to deliver a keynote address at the 2010 International CES as part of the third annual Technology and Emerging Countries (TEC) program, which focuses on technology’s role in furthering economic and sustainable development.

Kallasvuo was appointed president and CEO of Nokia in 2006. He has held several executive positions after joining Nokia in 1980 as corporate counsel, including executive vice president, North America; Chief Financial Officer and Chief Operating Officer. Kallasvuo has been a member of the Group Executive Board of Nokia since 1990, and was nominated to the Nokia Board of Directors in May 2007. He has been Chairman of the Board of Nokia Siemens Networks since its formation in 2007.

Zhou Houjian, chairman, Hisense, will deliver a keynote address at the 2010 International CES as part of the third annual Technology and Emerging Countries (TEC) Program, which focuses on technology’s role in advancing economic development.

Under Zhou Houjian’s leadership, Hisense Group Co. Ltd. has grown from a small regional multimillion dollar company to a large global multibillion dollar conglomerate. With a worldwide workforce of more than 60,000 employees, Hisense has over 300 sales companies and more than 60,000 service outlets around the globe. It has 13 manufacturing facilities in China, as well as in North and South Africa. In addition, it has three R&D facilities in China, as well as in the U.S., South Africa, and Belgium. Its products are exported to 130 countries and regions throughout the world.

Zhou has twice won the honor of China Central Television’s Business Man of the Year (2000 and 2005), a similar award to Time Magazine’s Man of the Year. He is also recognized as one of the most influential persons since China’s economic reform policy was established in 1978 and has been named as one of the â€œTop Ten Electronic Information Leaders since China’s Economic Reform.

Amazon’s Jeff Bezos unveiled the new large format Kindle today, the Kindle DX.   The DX appears to be a very impressive device that brings the elegant reading capabilities of the smaller kindle to a much larger screen that will be more friendly to newspapers and textbooks – the two reading items that appear to be Amazon’s target market for this brand new entry into the electronic reader fray: 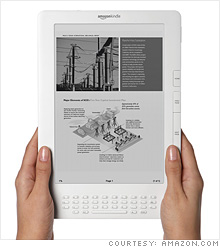 As a past skeptic of how the smaller Kindle could find the market needed to be a big success I’m certainly impressed, but also wondering about the economic viability.   At $489 for the new Kindle with at best only modest discounts for newspaper subscriptions I have to remain somewhat skeptical this can take off, although one can see a potentialy large library market since devices like this may make it easier for libraries and schools to manage subscriptions, textbooks, updates, etc.

Gizmodo’s got more on the specs and the launch.