The Palm Pre is the big winner here at CES with an incredibly innovative new phone design that some think may resurrect Palms flailing business in 2009. CNET has awarded the Palm Pre the prestigious best of show award for 2009, and so far there are no bad reviews of this device to my knowledge. As Treo users we are obviously excited to see if the Palm Pre shows better stability than what we’ve suffered with Treos, but this phone looks so good it’s clear it’ll be my next model as soon as Sprint carries the Pre. 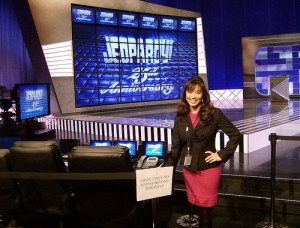 Kelly Miyahara is on Jeopardy’s clue crew. Behind her is the elaborate set on which Jeopardy is filming their tournament of champions as well as some celebrity jeopardy segments. Filming is all week here at CES Las Vegas for March TV schedules.    SONY owns Jeopardy and the technology behind this remote broadcasting effort is from  … SONY.

With about 4000 press and bloggers in attendance you’ll soon find all the CES Coverage you could possibly need right in your browser.    Some of the sites with large teams here are:

CrunchGear  (this is the TechCrunch Gadget blog)

With thousands of Press already here and the blog and Press lounges more crowded than last year, CES is not nearly in full swing.   Tonight Steve Ballmer will give the Pre CES Keynote, a role that has passed to him from Bill Gates after last year’s very clever Gates farewell to CES which included the clever Gates video with his friends in politics and entertainment as well as a Guitar Hero performance.

CES is Las Vegas’ largest event and takes place pretty much all over town although the key venues are the Las Vegas Convention Center and next door Hilton Hotel and the Sands Convention Center and attached Venetian Hotel.     About 2700 Exhibitors are showcasing here to some 4000 press and 130,000 attendees.    There are also hundreds of sessions and many keynotes.    For details go to the CES Website:   CES 2009

Since the Treo’s early days as the smartphone of choice for many, Palm has painfully been lagging others – especially the iPhone – in terms of mobile innovations.   However CrunchGear is reporting from a “trusted source” that Palm will launch a new device on Thursday, powered by an operating system called “Nova”, that may prove one of the sensational new products to be launched at CES.

The new Palm is reported to have a large touchscreen and a slide-down keyboard.  Lack of a physical keyboard is arguably the Achilles heel of the Apple iPhone where small screens have plagued all Palm devices to date so if this has both it could be a strong competitor in this very rapidly evolving field of smartphones and powerful mobile devices.

As a Treo user I’ve been anxious to make the jump to a new phone for some time and it’ll be nice to have a chance to try out some of best new phones for 2009 at CES this coming week.     Hopefully Palm’s new phone will at least match the high standards of other devices coming on the market soon.

Update: lots of competition for a few slots so I think chances are somewhat slim:
http://blog.boxee.tv/ces-video-pitches/

If you are a Boxee user you may want to consider this deal from the Boxee folks which is offering a *free trip to Las Vegas* including Airfare in exchange for helping run some Boxee demos.     Frankly for anybody who can’t afford their own conference this is a wonderful deal and hats off ot the Boxee folks for thinking of this approach to booth staffing:

Boxee will do this:

You will do this:

You’ll need to send them a video showing you promoting Boxee and presumably they’ll get more than enough entries but I bet if you are good on video you’ll get to go to this.

The only problem is that they pick the folks tomorrow so if you want to do this it’ll have to be right … now.

Techmeme is a favorite of many in technology for pulling together technology stories and the conversations that often swirl around them.  Unlike a simple “ranking” system, TechMeme surfaces the top stories and then links out to blogs and sites that are discussing those “hot topics”.     Thus a quick review of TechMeme can give you a very fast orientation to the stories that are making their rounds in the blogs.    That does not always correspond to stories that actually *matter* to real folks, but it’s a great start.

TechMeme’s new story editor Megan has a list here of the top 10 for 2008.   Number one was the Microsoft – Yahoo aquisition saga, number two was Apple quitting MacWorld, and number three was Google Chrome.

Wired has their list of the top ten technology breakthroughs of 2008.    Here’s the list.  I’m not sure I can get too excited about anybody that makes breakthrough *number one* the Apple Developer Aps Store, but it’s an interesting list at the least with everything from flexible displays (cool, but not out yet) to the Speedo LZR super slick swimsuits.     Hmmm – swimsuits and Apple application stores?    I’m kind of wondering if somebody put this together last night after a big turkey dinner.

C’mon Wired, surely there’s better stuff out there than this list?

With CES 2009 coming up in about ten days I’m confident that a better list than this, which we’ll be creating here at Technology Report during the Las Vegas conference, will have the top ten innovations *including* some of the superb innovations we are likely to see unveiled at CES.

However I should say it’ll be hard to top my current choice for top technology breakthrough of 2008 which came from the IBM Blue Brain project lab – a computerized simulation of a rat neocortical column.    Doesn’t sound impressive to you?   Keep in mind – that would be in the mind that equals your cerebrum which is largely composed of neocortical columns –  that the Blue Brain project may be on track to deliver a fully functional artificial intelligence.

If you’ve got one or more analog sets and you don’t want to shift to a cable plan to access TV after February 2009, you’ll need want to apply for digital converter box discount coupons available free from Uncle Sam at this website: https://www.dtv2009.gov/

The coupons are free, you can order two at a time, and the process is simple and only takes a few minutes. Each coupon is for $40 off the price of a converter box making them very cheap.

Editor’s Note: ALWAYS order two coupons.  I’m suprised at how many people don’t realize that all the old TV’s in their house will be worthless after February ’09 without a box. Nearly everyone has at least two, or can easily give away their extra card.  -John Ghysels

Details are just coming in but Twitter and Techcrunch are reporting that Jerry Yang will resign from the Yahoo CEO position very soon – probably tomorrow morning.    There are some Yahoo folks here at MashupCamp 8 so I’ll see if I can get some details tonight at the cocktail party.