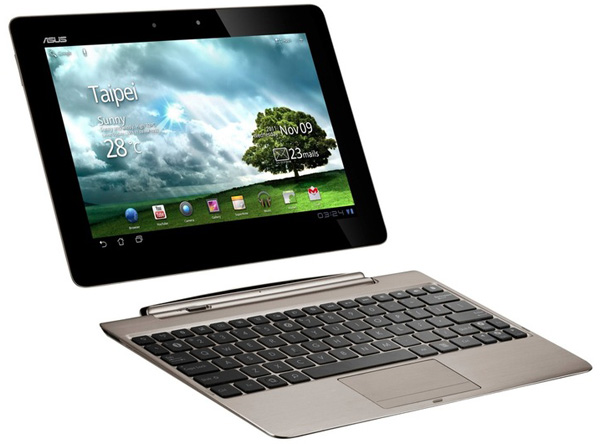 There are more different types, sizes, and brands of computers at CES than you can shake a stick at, though Apple is always conspicuously absent. In fact the Apple Tablet somewhat overshadowed much of the innovations of the Las Vegas show because clearly the Apple Tablet is going to be the “one to beat”, especially given the lack of any clearly “superb” tablet offering at CES.

Although I have not done enough research to generalize much about the best new PCs I think it’s clear that the mainsteam trend is towards smaller laptops and netbooks with robust features. Costs are going down – features that would have been unheard of at any cost 5 years ago are now standard on even a modest PC. Battery life is impressive and getting better – one of the ASUS PCs shown here had a battery that lasted something like 10 hours.

ASUS also has a new interesting line of *very large* laptops with high quality speakers built into the sides of the chassis to the left and right of the screen. Although heavy, these will offer huge power and a “desktop” feel for your mobile computing. Still, I think weight is the key factor driving down PC size and predict it’ll be the netbooks that dominate the market for the next few years.

Laptop Magazine looked at several of the new 10″ Netbook computers and has a nice write up of models from ASUS, Aspire, HP, Lenovo, MSI, and Samsung.

The ASUS and Aspire appear to be their favorites when all factors are considered but if you are in the market for a netbook you’ll want to read these and other reviews.

Happily for consumers if not for the industry at large, price in this category does not appear to correlate all that well with features and quality.

CES 2009 has kicked off with the big “CES Unveiled” party where press is introduced to several companies exhibiting here. I’ve had a chance to see several of the technologies and talk to other reporters which is always an interesting way to get an idea of what could be the stand outs this year.  (Pictures up soon – perhaps now via JoeDuck.com)

* Netbook mania!     After seeing Lenovo and ASUS’ offerings I’d have to give ASUS very, very high marks so far.   The new tablet PC, out in March, is a brilliant combination of form and function.  Swivelling from netbook to tablet, the unit will offer built in GIS navigation such that you can flip the screen, mount it on your dash for a mega sized GIS unit.   I think the cost he quoted was only about 500 for this very impressive fall format PC which will be robust in terms of specs but very mobile and light.   So far for me ASUS is the company to beat here at CES.

* Samsung super brite displays.   For me this was the showstopper in terms of visual appeal.   Samsung’s display won an innovation award for their massive  flat panel which  has a static constrast ration of 2000 and super bright back lighting for brilliant color even in daytime.

* Phoenix bios + operating system.   Hey, who needs a clunky old OS like VIsta when you can simply pull up a browser and be in the cloud emailing, blogging, and working?   Phoenix has a new product that basically replaces conventional OS with a browser.   At Matt Cutts recently noted ne as well as many of us are spending the overwhelming majority of our time within the browser, raising the question of what we need a big fat OS for anyway.

* Israel Technology boom: Israel is rapidly emerging as a major center of technology – note several of the Scoble reports from his recent visit there.  One person familar with the Israel tech terrain suggested that so many are coming out of their military service with high tech skills and that the society is very entrepreneurial, so this combination makes for very fertile
ground for innovations.