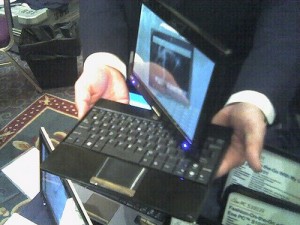 I think I was more impressed with the ASUS than Liliputing, but I found the idea of converting the netbook to a tablet with a quick flip, and then being able to attach this unit on a dashboard for a big GIS unit most excellent. The rep told me the GIS application will not be Google’s and I’m not clear how they’ll run that but one possibility would be the trick Blaupunkt was showcasing, also as CES Unveiled, where the user connects a device to their phone via bluetooth and then uses the mobile wireless plan to power these in-car broadband applications. Maybe I fell off the pumpkin truck but I had not heard of doing broadband in this fashion and I think that has some excellent implications for in-car mobile.

later…. at an HP presentation waiting to play with HPs similar offering which is already out, the HP tx2 tablet.   They’ve done a lot of studies in India and concluded that touch can “unlock access” to people who would not have access in tradtional form.   This is a very interesting aspect of emerging countries technology though I’m somewhat skeptical that building for illiterate folks is superior to … teaching them to read first.